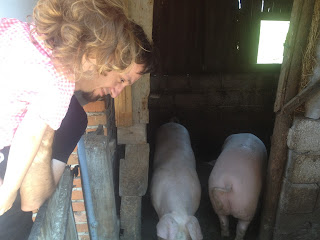 If you have an animal, say a horse, or a zebra, or a cat, or whatever, and you kill it for whatever reason, we can be pretty sure that most people would not complain or, if some people did not want you to kill those animals, they would buy them from you before you killed them.

My uncle, along with thousands of other farmers, kills pigs every year using traditional techniques that are quite painful for the pigs, yet no one ever complained, let alone sent him death threats for his treatment of the pigs. The reason why people would not complain or they would offer money to you not to kill your animals is that people recognize your ownership over those animals. Most people believe that, as long as you own an animal, it is none of other people’s business what you do with the animal, unless they can acquire ownership over that animal through voluntary exchange.

On the other hand, when it is not clear who owns an animal, then people are inclined to believe that everyone has some ownership rights over the animal and that it is everyone’s business to determine what happens to the animal. Most times, when the government owns a resource, people interpret that situation as everyone owning that resource. So, whenever there is a resource, including animals, that is owned by the government, we can expect most people thinking that they have some right to determine what ought to be done with the resource.

We can apply this to the story about Cecil the lion. Cecil was owned by the government, not you, not me, not your neighbor Jim, but an entity that is supposed to represent the interests of millions of people, including the international community, since that government is bound by international agreements with other countries’ governments. Cecil is thus a good example of a resource for which it is not really clear who owns it in the sense of who has the exclusive right to determine what ought to be done with him at any given moment.

Social scientists have been studying this problem for decades if not centuries, and they found that the solution is to make it as clear as possible who exactly owns the resource. Generally, private ownership is the clearest form of ownership. My uncle’s pigs are privately owned, and no matter how intelligent or how cute they look, most people feel that they don’t have the right to determine what should happen with those pigs. Even if someone felt strongly about the treatment of the pigs, he would go to my uncle and offer him some sort of a compensation to improve the well being of the pigs.

This theory works for other kinds of animals as well. There is a good track record of wildlife conservation through privatization. Local owners can benefit from hunting or selling the wildlife they own, but they are also interested in the long-term sustainability of their resource. This is why they would not let wildlife populations decline to unsustainable levels.

In the case of Cecil the lion, it seems that the world could have easily collected millions of dollars to pay to the owner not to let the lion be killed–if all the people who expressed their displeasure over the killing of Cecil donated only one dollar. The dentist that killed Cecil could simply not compete with this offer. This would be a far more effective way of protecting the lion than by sending death threats to anyone who thinks about doing a similar thing in the future. The only thing that was missing for this to happen was a clearly defined owner to whom we could send our money. And, imagine all the things that the owner could have done to improve the well being of his wildlife using this money! Instead, we are wasting our time and energy on a public lynch of some dentist.