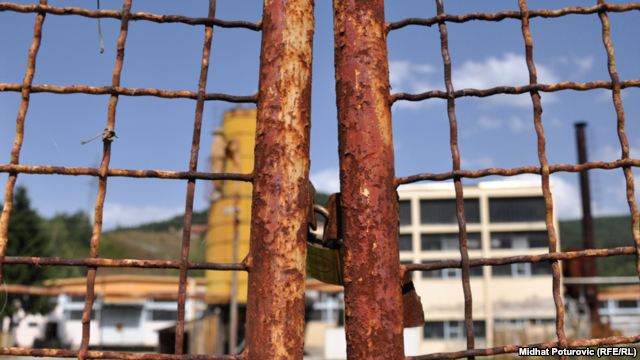 There seems to be a resurgence of nostalgia for the “good old days” among the citizens of countries that were once known under the common name of Socialist Federal Republic of Yugoslavia. This article is dedicated to all of us former Yugoslavs, especially those who think that the Yugoslav economy during Tito’s rule was built on a stable foundation. If we look at and analyze economic indicators, we have to admit that the idea of the robustness of the Yugoslav economy was an illusion and that the “well-being” that many former Yugoslavs are recalling with nostalgia was borrowed at the expense of future generations. These generations are now paying the bill for the collapse of the unsustainable economic system of socialist Yugoslavia, along with paying the bill for the destructive wars of the 1990s and the interventionist economic policies of former Yugoslavia’s successor states.

The first sign that the robustness of the Yugoslav economy was an illusion appeared immediately after Tito’s death. The 1980s were marked by constant delays of the beginning of the repayment period for Yugoslavia’s maturing external debt due to the financial weakness of the economy. In 1991, Yugoslavia had about $20 billion of external debt. Previous to that, the International Monetary Fund reduced Yugoslavia’s total debt by $1.8 billion because the country simply did not have the means to return the interest, let alone the principal. What preceded this outcome? This outcome was preceded by several decades of building an economy whose structure was such that its survival depended on a constant increase in foreign debt – an addict economy.

The chart below shows the total debt of Yugoslavia from 1961 to 1980, and the line that approximates the trend in total debt. The line has an exponential shape and it approximates the actual debt in the period 1961-1980 quite well. According to this trend, the total debt increased by about 17.6% annually in the twenty-year period. Had this growth trend continued after 1980, the total debt would now be around $6 trillion. When we consider that the total annual gross domestic product (GDP) of all the former Yugoslav republics together is now around $200 billion, the astronomical size of that potential debt becomes clear. This also clearly shows that the growth of debt that was recorded between 1961 and 1980 was simply unsustainable. 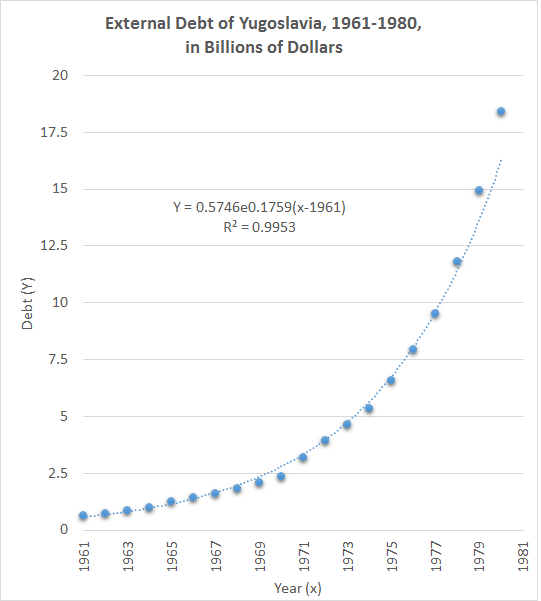 These numbers put the actual increase in total debt of all former Yugoslav republics, from about $20 billion in 1980 to approximately $150 billion today in a proper context. It is true that $150 billion is a multiple of $20 billion, but let’s keep in mind that, when we take into account the decline in the value of the dollar, $20 billion in 1980 and $100 billion in 2014 have roughly equal economic power. So, in real terms, the external debt of the former Yugoslavia has increased by about 50% since 1980. While we all might like this figure to be lower, compared to a doubling of foreign debt every three or four years before 1980, this represents a dramatic reduction in growth. This, of course, does not mean that the current debt of the former Yugoslav Republics is favorable and that their state economic policies are in good shape. It just means that it was unrealistic to hope that the Yugoslav debt could have remained at the level of $20 billion without serious structural changes and reductions in consumption.

While these numbers offer a potential explanation for the collapse of the Yugoslav economy in the 1980s, an exponential growth in total debt would not necessarily lead to a collapse, if the borrowing period was limited and its purpose was investment in projects that would bring about increased productivity in the future and thus facilitate successful repayment of the debt. Unfortunately, this was not the case in the former Yugoslavia.

The mere fact that the Yugoslav economy spent at least twenty years under the conditions of external debt growth of over 17% per year, suggests that the structure of the economy had formed in such a way that the future survival of the economy depended on the future enlargement of the debt. To understand why the Yugoslav debt rose at an increasing pace and why it was unsustainable, we need to analyze the chronology of the trade balance and productivity indicators of the former Yugoslavia.

When the economy of a country is in a trade surplus, foreign currency (which the importers use to buy those exports) accumulates in the exporting country. On the other hand, there is an outflow of foreign currency (used to pay for the imports) from a country whose economy is in a trade deficit. Countries that have consistently negative trade balances must borrow from foreign lenders to compensate for the lack of foreign currency. It is not hard to see why this situation is unsustainable in the long run, that is, it is sustainable only as long as foreign creditors want to lend money to the debtor country.

If we take a look at the overall Yugoslav trade deficit during the 1970s, we find that it was growing rapidly between 1970 and 1980. Moreover, the deficit was growing even faster than the Yugoslav foreign debt. A part of this difference was covered by remittances of Yugoslav emigrants. For example, the total remittances of emigrants were $1.3 billion in 1971, while they amounted to $2.1 billion 1972. However, even the inflow of foreign currency through foreign loans and remittances of emigrants was not enough to cover all the trade deficit and prevent the outflow of foreign currency from Yugoslavia. 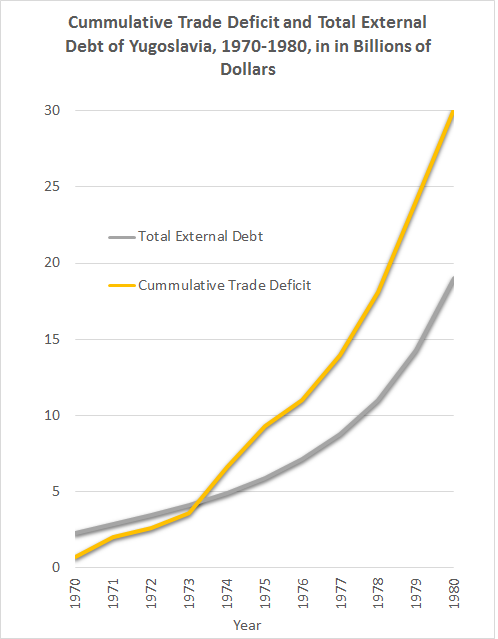 Measured as a percentage of the GDP, the total trade deficit of Yugoslavia between 1970 and 1980 increased from just below 10% to around 50% of GDP. The figure of 50% is not necessarily worrying in itself, but the the growing trade deficit in relation to GDP with no signs of slowing down indicates a worrying trend. This is another indication that the structure of the Yugoslav economy was such that the stability of the whole economy depended on the inflow of foreign funds for which there was no coverage in the domestic production.

The structure of the Yugoslav trade deficit was such that the imports were mainly oil and raw materials. This structure of production does not promise an increase in productivity in the future, which would cover the past trade deficit and that could be used to pay off debts. Moreover, although the total volume of production at the level of the Yugoslav economy grew because more resources were used, the productivity per unit of invested resources was decreasing in most industries during the sixties and seventies. With such reduced productivity, the chances of a successful repayment of the foreign debt in the future were nil.

The structure of production in which money for buying raw materials and fuel is borrowed ceases to be viable when the source of credit dries up, and, in the case of Yugoslavia, this happened in the early 1980s. The Yugoslav economy was then left without external “fuel” and, over the next decade, which was marked by postponing the repayment of foreign debts, this became painfully evident. Not only that the Yugoslav economy didn’t have the capacity to repay existing debts, but its capacity to function in an undiminished size was dependent on new borrowing. There was a sharp stop in the growth of the Yugoslav GDP in 1980, and its decline began around 1986.

These data suggest that the story we often hear about how the former Yugoslavia “heroically rose from the ashes” after World War II is not complete. First, it is not clear how heroic this rise was, especially if it was due to unsustainable borrowing. Second, it is difficult to give an assessment of this story if we don’t know how the other countries have “risen from the ashes.”

So, let’s compare the GDP per capita of some countries that had roughly the same GDP per capita as Yugoslavia in the late 1940s. Let’s see what the historical data tell us. They tell us that all the countries shown here, with the exception of Hungary and Bulgaria, had significantly higher growth of GDP per capita between 1947 and 1989 than Yugoslavia. So, maybe Yugoslavia rose heroically from the ashes, but it seems that Japan, Germany, Italy, Austria, Greece, and Spain have risen from those ashes even more heroically.

Even the figure of over $12 billion that the countries of Western Europe received in U.S. aid as part of the Marshall Plan pales in comparison with the $47 billion, that Yugoslavia received in the form of industrial equipment and money as reparations for war damages after World War II. In addition, there is strong evidence that the role of the US interests in Yugoslavia after the Second World War, represented in Truman’s and Eisenhower’s foreign policy, was similar to their role in Western Europe. This role consisted in providing political and economic support for the regime as a counterweight to the “hard” socialism of the Soviet Union and its European satellites. Therefore, we cannot attribute the significantly faster growth of Western economies to a disproportionate help by the United States as compared to Yugoslavia.

On the other hand, Hungary and Bulgaria show similar slow growth in gross domestic product to that of Yugoslavia. Except that it should be noted that, unlike the other countries shown here, Hungary and Bulgaria had similar economic system to that of Yugoslavia, a detailed explanation of the differences in the speed of “rising from the ashes” is a topic for a separate analysis.

When it comes to the other economic indicators, such as household income, inflation, or unemployment, the situation was not rosy in the last ten years of Tito’s rule either. Despite the pumping of huge amounts of foreign funds into the country, household income declined sharply in the second half of the 1970s. The annual inflation rate was measured by two-digit numbers, and a few years before Tito’s death, it accelerates and reaches 40% per year. Despite the departure of over 1.1 million (or 20% of the workforce) Yugoslavs to temporary work abroad, the unemployment rate climbed from slightly below 7% to about 12% from 1970 to 1980. Such growth rates of unemployment and economic emigration are characterized as a sign of a deep recession in economic literature. Thus, the Yugoslav economy was in a terrible condition in the late seventies, but this was masked by the increase in foreign loans of epic proportions, combined with a dramatic increase in economic emigration.

It might be time to revise our beliefs about the “heroic achievements” of our former homeland and acknowledge that, despite the steadily rising influx of foreign funds in the form of loans without a collateral, foreign currency remittances of millions of emigrants and politically motivated U.S. economic aid, the Yugoslav economy achieved only a modest growth. However, even this modest growth was not sustainable without continued foreign aid. What happened in the eighties and nineties, was only the revelation of the actual state of the Yugoslav economy. Just like a chronic alcoholic must face the reality of his addiction, so did we, sooner or later, have to face the reality of the powerlessness of the Yugoslav economy to function without external doping.

5 thoughts on “The Economy of Tito’s Yugoslavia: Delaying the Inevitable Collapse”