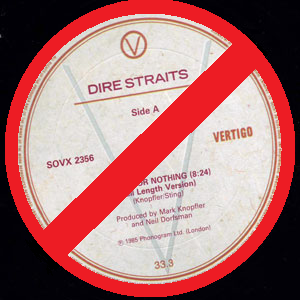 You may or you may not agree with the recent Canadian Broadcast Standards Council (CBSC) “ban” on “Money for Nothing,” a Dire Straits hit from 1985, but we can probably all agree that this event has sparked an intense debate within the Canadian society. In my view, this debate has created more heat than light. I will try to add some light to the issue by focusing on the right questions rather than giving answers.

First, let us define a ban. Webster’s online dictionary defines the verb to ban as “to prohibit especially by legal means.”

A ban has no meaning if someone can choose not to obey it without being punished with force and in the current state of affairs, only the State has the authority to use force to implement bans. Thus, a ban only has meaning when we expect that the State will enforce it.

In this particular case, if one expects all the broadcasters to agree to stop playing the song, a broadcasting ban would be pointless because all the broadcasters would have decided not to play the song anyway. Therefore, the only sensible explanation for claiming the CBSC’s decision has a status of a ban is that the Council expected that some broadcasters would want to play this song but they would choose not to if they are threatened by force (i.e., fines, and whatever else), which, to be enforceable within the current legal system must be backed by State sanctioned force.

This points to the next question we need to ask: does the Canadian Broadcast Standards Council have the legal power to ban a song. The official CBSC site describes this organization as follows:

The Canadian Broadcast Standards Council (CBSC) is an independent, non-governmental organization created by the Canadian Association of Broadcasters (CAB) to administer standards established by its members, Canada’s private broadcasters. The Council’s membership includes more than 730 private sector radio and television stations, specialty services and networks from across Canada, programming in English, French and third languages.

Thus, under the current legal system, the CBSC would either have to have complete ownership of every broadcasting station (which would make the term “independent private broadcaster” absurd) or call upon some other legislation that overrides private ownership and could be used to dictate other people’s actions.

Now, the only remaining question is: what is the legislation that CBSC could be using to override private ownership of Canadian broadcasters in this case. If there is no such legislation, the decision of the Council could, at most, have a status of a condition for membership in the Canadian Association of Broadcasters. In this case, any broadcaster wanting to air the problematic tune could do so after dissociating itself from the Canadian Association of Broadcasters, assuming that this is, indeed, a voluntary association of private entities.

However, if there is such a law that gives the CBSC the authority to call upon State force in implementing its decision, those that claim that Canada banned “Money for Nothing” would do us all a favour by clearly identifying this law. In any case, it seems that this controversial move on the part of the Canadian Broadcast Standards Council has put the Council in an unenviable position while spurring the public euphoria for the “banned” 80’s hit. Canadian broadcasters are in dire straits while Dire Straits, seems more than ever, happily populate our CD and DVD players, YouTube playlists, i-pods and any other audio-carrier outside of the domain of the Canadian music police.